We spent a week in Washington on our ’88 honeymoon. Way up in the San Juan islands, across the Puget Sound by ferry, on Orcas Island.

Our little cabin above Doe Bay was cosy, but we’d seen a sign saying “suits optional” and were curious. It was an outdoor hot tub. We figured the sign meant bathing suits, not formal suits (we had a South African giggle at the wording), so removing all our kit we slid into the steaming tub overlooking the picturesque bay.

To Aitch’s consternation we were joined by four more people, she being kinda shy. We had a lovely chat about Washington, Canada, Africa, America – and after a long soak they hopped out up the steep ladder, causing the polite among us to avert their gaze from the under-chassis glimpse this afforded one.
Aitch wanted out, but only after the last of the ‘locals’ had left did she make the climb, looking decidedly prune-skin.
That memory gave us fond chuckles for 23 years! 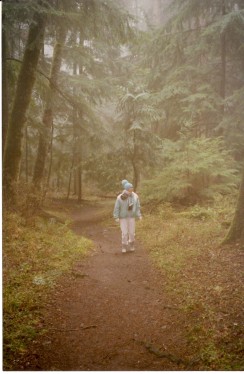