Aitch was impressed: Luxury with Wilderness Safaris at Ndumo, grub and game drives laid on. Aitch had fun with the giraffe’s dong. So where we going next? she asks. “You’ll see”, I say. Hmm, she said, knowingly, raising one eyebrow but saying no more . . .

Aitch being rude with the Giraffe’s dong. Check the expression!

We were in a magic Isuzu Trooper kindly loaned to us by Mike & Yvonne Lello and were on a Maptuland Meander. Leaving Ndumo we drifted east to Kozi and inspected the campsites, then drove on to Kozi Bay Lodge. “I’ll just run inside and arrange things,” I said, optimistically.

So I walked into the lodge and came out and said “We’ll just camp outside the gate, I brought a tent!” Ha! You hadn’t booked! Aitch announced triumphantly. She’d known all along. She actually loved it. She didn’t really mind the roughing it and the uncertainty and she LOVED catching me out and teasing me about my disorganisation.

She says there was a bit of muttering and a few mild imprecations erecting the unfamiliar tent. OK, some cursing, she said. Loud cursing.

We drove to Kosi mouth:

Then onward, southward. Where we staying tonight?, she asked sweetly. “You’ll see,” I said. Hmm, she muttered knowingly, raising one eyebrow. Well, let me just say ONE thing: We are not staying at Mabibi. The newspapers have been full of stories about bad guys at Mabibi. “Izzat so?” Yes. We can stay anywhere but Mabibi.

Well Rocktail Bay Lodge was also full and we drove on as evening approached. The fire watchtower man had knocked off and was walking home. We stopped to ask directions, then gave him a lift so he could show us the way. He settled down into the bucket seat, pushing Aitch onto the gear lever.

You’re going to Mabibi, aren’t you? said the all-knowing one. “Well, there’s nowhere else,” I mumbled. When we got there she surprised me by saying Let’s just sleep under the stars, I’m too tired to pitch the tent. So we did. My brave Aitch! Here she is next morning. 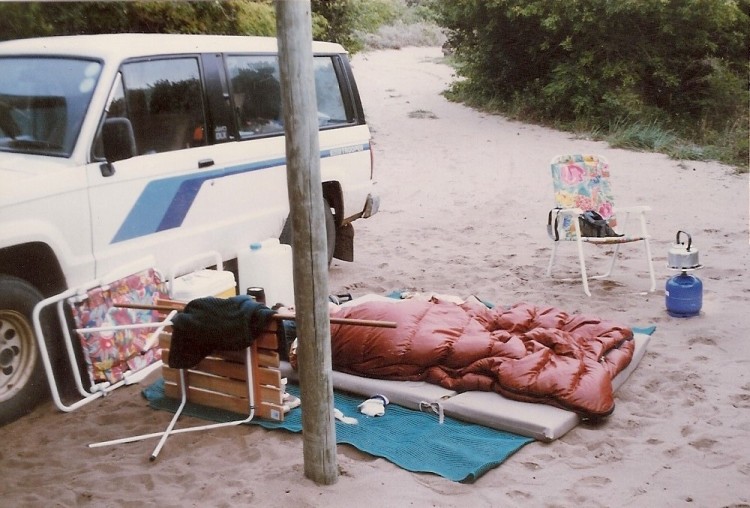 What a lovely vehicle was that Isuzu Trooper! What magic Maputaland roads! 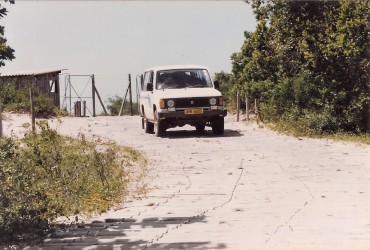 One more night, in relative luxury, if the little wooden cabins at Sibaya camp can be honoured with description! and we hit the ugly highway home. A very special place Maputaland.