Tom is in Gamalakhe inland of Shelly Beach visiting his big mate Lungelo. Lungelo has just been with us for a few days. They get fetched by Lungelo’s parents and today they’re going to church.

They leave at 08h30, church starts at 09h00 and on his way Tom messages me: “No airtime, please send”. I say Sing Those Hymns Sweetly My Boy.

At 14h12 he says “I am never going to another day of church in my life again!”

They got home at 16h15!! That’s torture! That’s cruel and unusual punishment! A mate of mine said his posh private boarding school cured him of church forever. I think this church has done it for Tom! 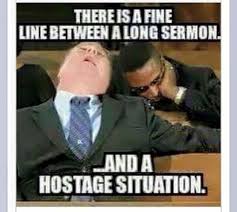 I fetched him in Shelly Beach on Thursday and got another heartfelt tale on the way home. The adults had seats, they had to stand! The preacher shouted over the tannoy for most of the six hours! The speakers would go WOOOH! and then SQUEEEE! every so often. The theme of this six-hour sermon was “scapegoats” or “escapegoats”, and these words were said about a million times, only surpassed by the number of times he said AMEN!

The collection drums came round four times. One round had the injunction to cough R50. He was asked why he hadn’t given, so he gave R2. He was also asked at one time why he was sitting on the floor, not standing. Some adults arrived late, some left early. The preacher would take a five minute break every so often while the people sang. “I’m sure he went out for a snack and something to drink” said an envious Tom.

In the last hour he made a resolution: For every hour he was trapped in this church he would avoid church for a full year! He reckons his next run-in with any church will be in 2024 – maybe.

Maybe he should send the preacher this link: