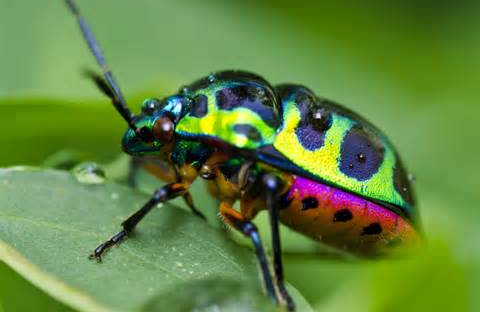 Asked what could be inferred about the Creator from a study of His works, British scientist and naturalist JBS Haldane replied:

“The Creator, if he existed, had an inordinate fondness for beetles”.

I have just re-read the delightful book Jayne Janetsky gave me in 1999 and learned again:

– Every fifth species of known animal in the world is a beetle;
– Beetles come in the most beautiful array of shapes and sizes and colours.

Absolutely fascinating! And right up my alley!

The book has a few more!

In a letter to the August 1992 issue of The Linnean, a friend of Haldane’s named Kenneth Kermack said that both he and his wife Doris remembered Haldane using the phrase ‘an inordinate fondness for beetles.’

Haldane was making a theological point: God is most likely to take trouble over reproducing his own image, and his 350,000 attempts at the perfect beetle contrast with his slipshod creation of man. ‘When we meet the Almighty face to face he will resemble a beetle or a star, and not Dr. Carey’ said Haldane. [Carey was Archbishop of Canterbury].’