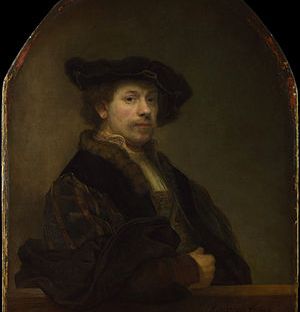 Back in 1640 Rembrandt decided to take a selfie, so he whipped out his pigments – lead white, bone black, charcoal black, a few ochres and vermillion – and took the selfie you see here.

He called it Self Portrait at the Age of 34. He had tried out a similar pose in an etching of 1639, Self Portrait, Leaning on a Stone Wall, looking rather more rakish.

These are two of over forty self-portraits (or, um, selfies) by Rembrandt van Rijn and, like most selfies, they depict him in a favourable light, at the height of his career, richly dressed and self-secure.

If it had been now his second one would have been Self Portrait, Leaning on my Porsche.

Edit: Rembrandt was a johhny-come-lately.

Albrecht Dürer’s self-portrait of 1498 was probably ‘the first independent self-portrait ever produced.’ A German artist is thus said to have introduced the process of artistic introspection that has fascinated viewers ever since.

This from a new book The Self-Portrait edited by Tobias G. Natter.