This post from my matric (or senior high school) year back in 1972. I chose it as just yesterday Sheila discovered letters I had written home from the course! So I added one 48yr-old letter and re-posted it here from my early days blog – http://www.vrystaatconfessions.com

Veld & Vlei at Greystones on the banks of Wagendrift Dam in the July holidays of 1972, my matric – or senior – year of high school. It was a ‘Leadership School’ – ‘a physical and mental challenge,’ they said.

Memories of a busy week: The tough obstacle course – carry that 44-gal drum over the wall without letting it touch the wall! Other obstacles, including tight underground tunnels. And HURRY!

Chilly winter nights in these old canvas bell tents – we slept like logs:

Cross-country runs; PT by military instructors. What’s with this love for things military? Brief immersion swims in the frigid water of the dam every morning; The lazy bliss of sailing an ‘Enterprise’ dinghy out of reach of anything strenuous!

Then the second week: Being chosen as patrol leader; A preparatory two-day hike in the area. One of our patrol was a chubby, whiny lad, so we spent some effort nursing him home. He was worth it: good sense of humour! Poor bugger’s thighs rubbed red and sore on the walk!

Then the climax, the big challenge: The course-ending six-day hike! By bus to the magic Giants Castle region in the Drakensberg.

We set off with our laden rucksacks down the valley, up the other side towards the snow-topped peaks, heading for Langalabilele Pass and the High ‘Berg. We had walked about 5km when a faint shout sounded and continued non-stop until we stopped and searched for the source. It was an instructor chasing after us and telling us to “Turn around, abort the hike, return to Greystones! Walk SLOWLY!”

Someone had come down with meningitis and the whole course was ending early!
We were given big white pills to swallow and sent home with strict instructions to take it easy: No physical exercise.

But our rucksacks were packed . .

. . and our wanderlust aroused, so we headed straight off to Mt aux Sources soon after getting home. Up the chain ladder onto the escarpment and on to the lip of the Tugela Falls, sleeping outside the mountain hut.

I had no camera, no photos, the only record I still have of the course is my vivid memories – and the blue felt badge they gave us on completion.

But then I found a website by someone who had been on the same course – Willem Hofland from the Natal South Coast – and he had these black & white pics which I am very grateful to be able to use! He also had his course report and certificate, which I no longer have.

Stop Press! Today got a letter from the dim and distant past: A letter I wrote my parents soon after getting to the course – on the second evening, it seems? This, written 48yrs ago! 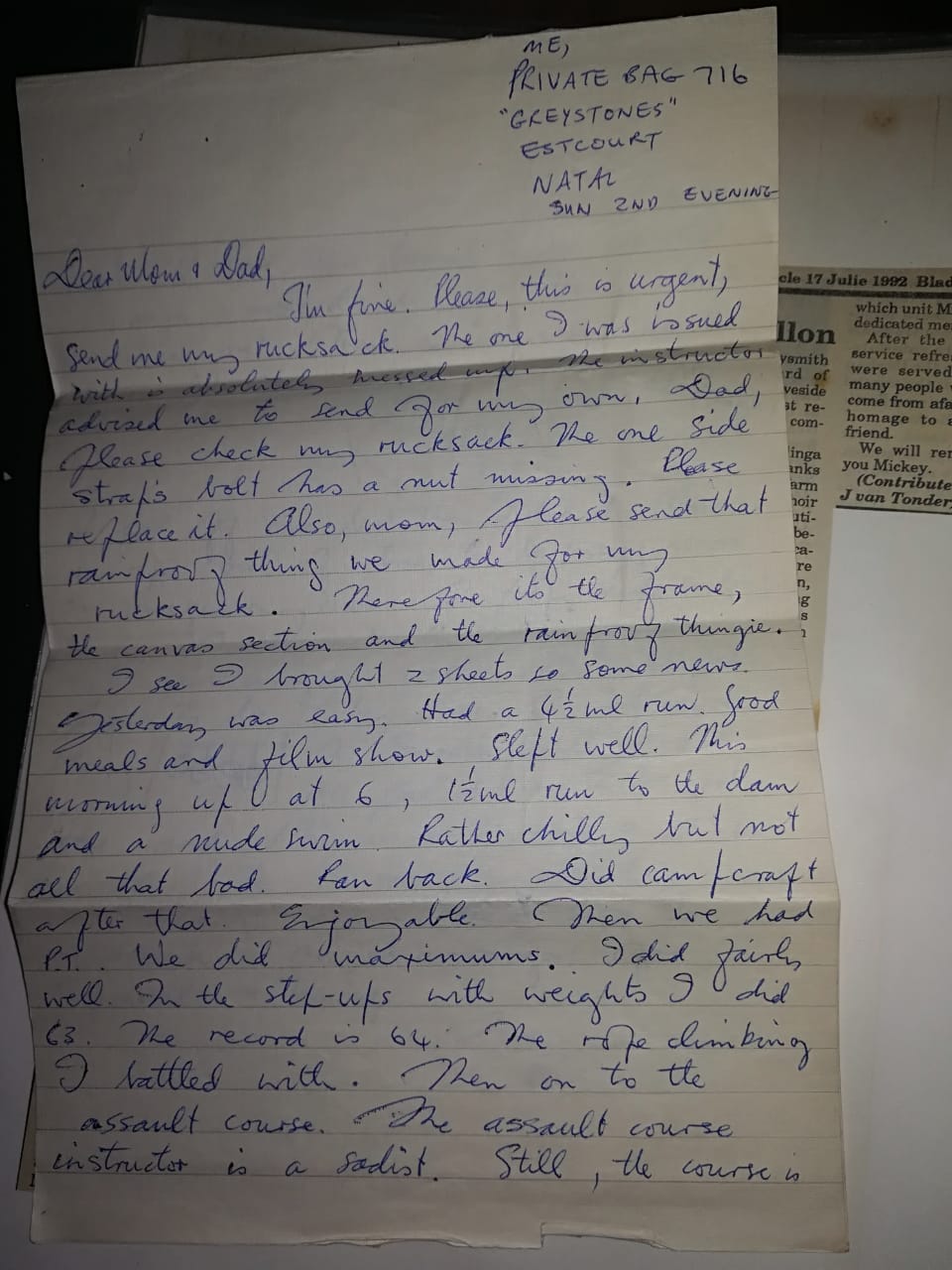 Giants Castle pic from howieswildlifeimages.com – thanks!