We’d been meaning to go for ages but, you know – procrastination.

The idea of a long road trip up north is a common dream and – like many Saffers – we planned to do it ‘one day’: A “safari!” – a Swahili word meaning just plain journey. Probably originally from the Arabic سفر (safar) meaning a journey;

Then one lazy day at home in 2003 I read a lovely interview with an Austrian bloke who had traveled down through Africa on his own from Vienna to Cape Town on a motorbike. The journalist interviewing him asked him about the trip, his adventures, his highlights and his challenges. He’d had a fun time.

The journo then looked down at his bike and said: “Hey – this is a dead-ordinary street bike! What on earth made you choose this bike for your African safari?”

“Choose it?” he said “I didn’t choose it. I had it”. That did it! I got up right there and then and started pacing around. ‘Acting strangely’, according to Aitch.

Within a few months of reading that Wake-Up! What Are You Waiting For? call we had hopped into our white VW kombi petrol 2,3i 2WD with 195 000km on the clock and headed north.

Two little problems: While procrastinating we had adopted Jessie, now five, and Tommy, now 22 months old. But what the heck, even after we’d modified the kombi it was still a six-seater. There was room for them! 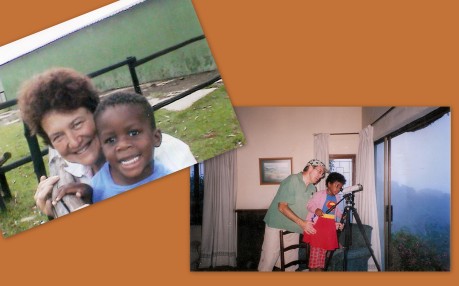 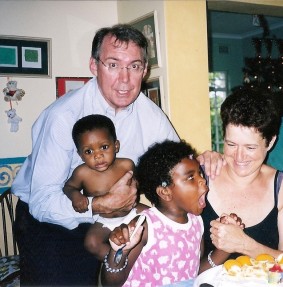 Mom’s birthday 2003. Jess about to snuff the SINGLE candle!

One thought on “On Safari with a Bushman – 1. The Decision”