With all due respect to Moremi, Chobe and Makgadikgadi, the birds you can see in and around Maun rival them all. In fact, pound-for-pound or especially dollar-per-bird, Maun wins hands-down. Especially  when you’re staying in your little sis’ house, eating her food and driving her car!

So here’s a good recipe for Best Botswana Birding: Don’t just land in Maun and buzz off elsewhere! Rather stay in this lovely home:

Drive this superb 4X4. With 400 000km of all-Botswana roads experience on the clock, it didn’t even need much steering:

and bird the immediate vicinity:

Here are some of the birds seen in and around Janet’s home and along the Thamalakane where she walks her dogs. Forty one shown, but there were more.

Added bonus: Visit the spots like The French Connection, Miguel’s Place, Tshilli Cafe, Lodges along the river – and Ann’s CinemaMultiPlex for breakfast. Wonderful food and they all serve alcohol! What more could you want? 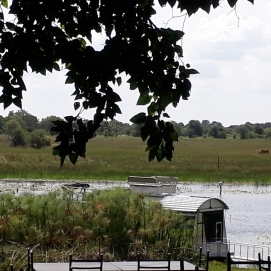 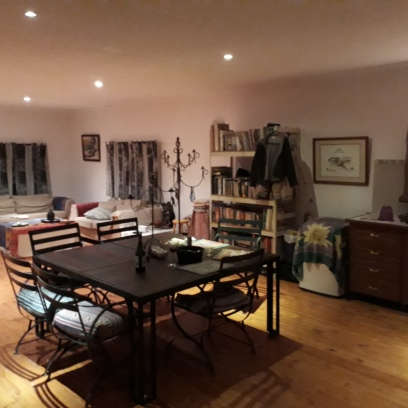 On a drive out towards the Boro River Janet and I stopped at a flooded grassland and watched a bird party frolicking on three little acacia trees, dropping down to drink clear water in some tyre tracks. Here’s the spot: Most of the action was in that small acacia dead-centre, behind the foxglove (help me here) stem.

Twenty three species within half an hour! It got quite “Shu’ Up! Another One?” Here are fourteen of them (Lee Ouzman pics mostly).

These two black birds were mingling with the unsuspecting colourful hosts that they parasitise! Like, your spouse’s lover has come to supper . .

The Indigobird was a LIFER for me! Long time since I nailed a lifer.

Here’s some other stuff as we searched for the Boro – and there’s the lily to prove that we found it. How’s the height of that termitarium? Janet is not tall, but that’s still some structure!

Yet another advantage to having a little sis who’s a nineteen-year Maun veteran is she can sweet-talk curmudgeons into showing you their patch. So we ended up one morning walking the Tamalakhane flood plains in Disaneng guided by an old bullet with a long lens after drinking free coffee here:

Imagine if he got a wife how she’d make him smarten up that stoep, ne!? Despite the low-key decor, the coffee’s top-notch.

We saw three of these birds plus a bat hawk flying. These are his pics, but from his website. His lovebirds he shot in Namibia, but we saw a few in his garden that morning! Escapees? Or had they followed him home?

Read about the history of Maun here where Lee Ouzman has more old photos like the one on top of Maun ca1985 when I first visited this Kalahari metropolis.

From Maun we ventured North-east to Mgotlhong and south-west to Khumaga. And back each time.

3 thoughts on “The Under-rated Metropolis of Maun”