Janet Humphrey got this magic pic of a young Giant Eagle Owl and a Paradise Flycatcher in her old garden on the banks of the Tamalakhane river in the suburbs of Maun in Botswana.

BTW – Owl wisdom? Not so much 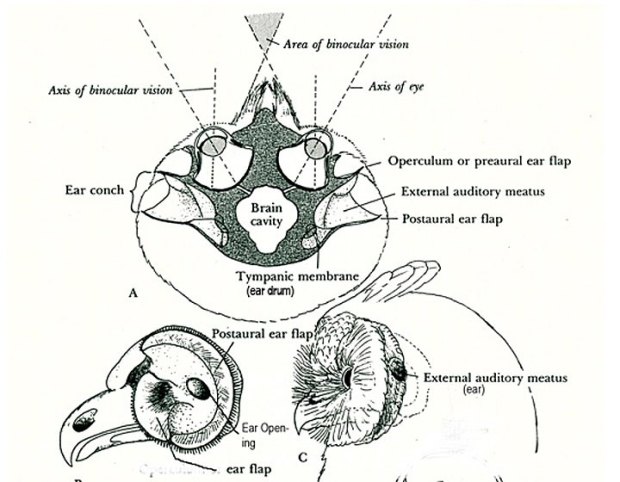 Owls are “eyes and ears on wings”. That brain cavity above is about the size of a large peanut. Two-thirds of the owl brain is devoted to sight and hearing. Of the one-third that is left, about 75% of it is devoted to hard-wired instinct and lower functions. That leaves a tiny little sliver for learning which is mostly taken up by remembering good hunting grounds and hunting strategies that work.

Owls are not social creatures like parrots or crows, so they don’t need a lot of cerebral cortex. Think of them as the sharks of the sky. Very good at what they do (hunt, see, hear and reproduce). Mediocre at everything else. (Thanks Mercedes R. Lackey on quora.com).

Geoffey Widdison, also a quoran, asks why we associate owls with intelligence and wisdom and decides “the most likely reason is that they have large depressions around their eyes (which, ironically, are apparently there to direct sound more than to help vision), and that makes them look ‘intelligent and deliberative’ to humans. In other words, not only are we judging by appearance, we’re judging another species on something that has no connection to the quality we attribute to it. (We’re ‘anthropomorphising’).

Which suggests that, while owls aren’t especially bright, neither are we”.

Here he is a few months later in a neighbour’s garden: