I may be in line for a world record soon. We’ll know in about 190 years time.

I read it here- 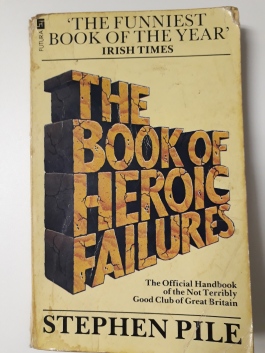 Seems the Slowest Selling Book Ever was a 1716 translation of the New Testament from Coptic into Latin by David Wilkins. He sold 191 copies.

Well, as far as underachievement goes that’s piffling stuff! I sold exactly zero of my 2016 Umko 50 years book, so I should be able to whip this Wilkins’ ass handily. We printed 300 and gave them all away, so unless people start re-selling them I’m safe, and should become an honorary member of the Not Terribly Good Club of Great Britain.

The Book of Heroic Failures was written by Stephen Pile in 1979 in celebration of human inadequacy in all its forms. Entries include William McGonagall, a notoriously bad poet, and Teruo Nakamura a soldier of the Imperial Japanese Army who fought World War II until 1974.

The original edition included an application to become a member of the Not Terribly Good Club of Great Britain; However, this was taken out in later editions because the club received over 30,000 applications and closed on the grounds that it was “a failure as a failure” (but not before Pile himself had been deposed as president for showing alarming competence by preventing a disaster involving a soup toureen, then being expelled from the club for publishing a bestseller). The American version of the book was misprinted by the publishers, who left out half the introduction. As a consequence, later versions of the book came out with an erratum slip longer than the entire introduction. (wikipedia)

Pile says “People keep talking about the things man does well, when these few blades of grass are surrounded by vast prairies of inadequacy which are much more interesting”.