** this blog is mainly after I got married in 1988; my other blog vrystaatconfessions.com is essentially pre-marriage; sometimes things don’t fit neatly into one or the other – they overlap; so occasionally I copy and paste **

She got the fascinating life story (well actually, snippets of it!) of Irené John Joubert out of him recently.

Fascinating thing is, Tuffy DID this stuff, Chuck Norris acts it out. Here’s an eyewitness account of his famous plummet from a helicopter.

Here he is in those far-off days when you could see his chin and not his forehead:

Tuffy’s older brother Etienne remembers him getting his nickname like this: In the very English environment of the Methodist church some soutie made the mistake of calling the French masculine name Irené the English feminine name ‘Irene’ in Sunday school and promptly got dondered right then and there by said Irené. And hence the nickname Tuffy was born.

I see Tuffy says he has no trouble in Afghanistan, Iraq and the Congo as “with my honest face, people just love me”. What I want to know is: How do they see his face?

Well, now that his cover is bust, his anonymity lost, learn more about Tuffy being a domkrag and then tackling an unsuspecting ox here

and head-on colliding with a hill here

and streaking and under-age drinking here

and he played rugby for a little dorp and beat Grey College here . 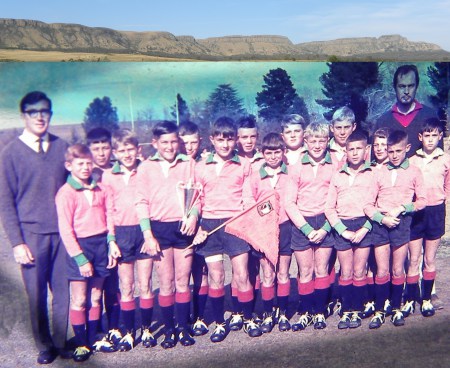 Chuck’s going to have to lift his game. Also, and anyway, America can forget toughness, Harrismith also had another Chuck Norris.

Thanks Mariette for the article! See: http://atlanticgull.com/chuck-norris/

Added: And how Tuffy tricked me here.