Brauer was running Comrades. Successfully. I was definitely not – not even unsuccesfully yet. I had always thought running was easy – you just put one foot in front of the other, how hard can it be? I couldn’t understand how they wrote books about it. I mean c’mon!

So I joined him on a 32km run in Springs on the East Rand on his build-up to the big crazy ultra day when fools shuffle from Maritzburg to Durbs-by-the-Sea.

Oceans of people filled the park at the start – It was the Springs Striders club’s big race. I had never been in such a big field. The Harrismith Mountain Race was the biggest bunch I’d run with before – nothing like these thousands.

The gun went off and – nothing happened. Eventually we started shuffling forwards, then walking, then eventually we reached the start line under the ‘Start’ banner and after a while we could trot a bit. Then it opened up and we got into my stride (mine, as Brauer thoughtfully stuck with me and didn’t go roaring off like a Fordyce). After a while we passed a tiny little ancient man barely shuffling along with his shoulders hunched and his eyes firmly fixed on the tarmac a metre in front of his feet. He must have started way ahead of us in the pack, but now we had caught him due to our superior pace, skill and youth. I looked at Brauer and crowed quietly: “That’s one good thing about these mass runs: At least there’s always someone who you know you’ll be beating”. I had never been in a mass run, of course, but I was drawing on my extensive experience as a spectator, where I would always be near the front, striding out with knees flashing past my ears.

And so it went for 16km, me matching my Comrade Brauer stride-for-stride. Inexplicably then, I felt the urge to tap off a bit and at around the 20km marker Brauer mumbled something and disappeared effortlessly off into the distance. It sounded like “Fuckit, we’ll fall asleep if we continue at this snail’s pace” but it wasn’t that.

At 25km I heard a quiet little shuffling and a tiny little ancient man barely shuffling along with his shoulders hunched and his eyes firmly fixed on the tarmac a metre in front of his feet came past me as if I was going backwards. His pace was exactly the same as it had been when we passed him on km 3 or 4. Mine was not. So I started walking, joining up with some other porky-looking fellows. The spring had left my stride on the Springs Striders.

“Look at him!” one of my fellow strollers said, “That’s Liege Boulle. In 1983 he won his 39th Comrades medal, fifty years after his first”. 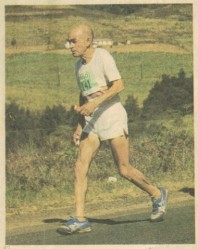 I learnt a big ‘respect-your-elders’ lesson that day which I try to thump into my kids’ skulls now. Unsuccessfully.

Years later I got back to that park in Springs where Brauer was waiting. Patiently. He knew better than to call out a search party. It must have been within some sort of time limit though, as they gave me this cloth badge with the appropriate animal on it.

You would think this would have decided me not to run the Comrades ever.