He worked on a wooden lathe that his father had hand-made, he said. He was spinning silver – thin sheets of silver – a wheel presses the silver onto a wooden cup-shaped form as it rotates, spreading and shaping the metal.

He said he imported his porcelain inserts or inlays from Czechoslovakia and added them to his silver tea and coffee cups for his signature look.

Dad bought two sets from him, and paid him 5 Egyptian pounds, “worth way less than English pounds” he says.**

That was back in 1943. Nowadays Saad of Egypt are Cairo’s best-known silversmiths. Saad was born in 1939. He says he still forges his own silver “in the tradition of Zorayan the Armenian, which his children unfortunately discontinued”. You won’t watch his skilled craftsmen spinning silver on a wooden lathe, though. He regards them as a rare commodity and takes precautions against losing them, concealing them, as he explains, “in our workshop away from the Khan, in the Cairene district of Ghamra. After all, a competitor could come in and lure them away”.

Saad’s advice on the best way to polish silver is a combination of “soap, warm water and a toothbrush — forget all the polishes promoted on the market; they just aim at making money . . .”

So where does this story suddenly come from? It started on LindiLou’s rose farm this weekend. She had her big annual Tarr Roses Open Day, selling roses and teas and all sorts on the farm, but especially roses.

An old Harrismith friend was there and she said Dad had sold her mother his Egyptian (Armenian) coffee cups! This brought back memories of buying them in a market in Cairo 74 years ago!

Now he wants to buy them back from her! He’ll pay ‘any price’ he says.

Later: Yesterday I heard more from Dad. The lady does not want to sell her coffee set as they were a gift from her late mother, who got them from her late father, who bought them from Dad for two heifers. They thus have sentimental value to her. Dad is indignant: “They have no sentimental value to her, they have sentimental value to ME!” She had them valued at R3500 each (apparently there are two sets) and Dad says no way he can afford R7000 but its not right! He now wants to ask her to put a note on them: In case of her death they must be sold to one of his three children. None of whom want them!

The kicker: He actually has no recollection of buying four sets. The two he remembers he gave to his daughters Barbara and Sheila, who still have them. He remembers nothing about the sale nor anything about two heifers. The bloody things PROBABLY AREN’T EVEN HIS! The ‘sale’ probably never happened. But he has his piddle in a froth about them.

Sheila tells me what she has is a tea set in a wooden box the old man made her to display them in. Here it is with pics of Dad and us: 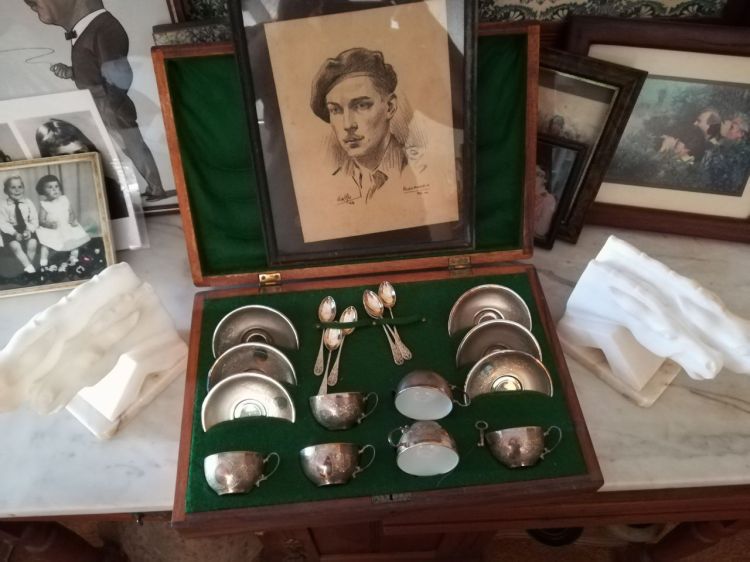 At an antique fair in Umhlanga years ago she was told by the evaluator that they were not worth very much, as ‘every second soldier brought one home’.

The thlot pickens. Another of Dad’s stories Sheila remembers from the past, is that he did indeed buy those coffee cups he now can’t remember, but he couldn’t bring them home from Italy, he simply had too much loot to carry. So he gave them to a comrade to bring home for him. Once back in SA he lost touch with the man. He enlisted the help of his brother-in-law Solly Solomon, a colonel in the police, who did find the man, but advised Dad to forget about getting his stuff back. The man was a down-and-out on the bones of his arse, and had long since sold anything he possessed.

One thought on “Dad’s Coffee Cups in Cairo”