I’m coming down to Durban to buy a parrot. Where’s Overport? asks the ole man.

Then the ole lady phones, all worried – as ever. Can you tell us how to get to West Road in Overport, Koosie? I say I’ll try, phone you back. I need to hatch a plot. I phone back and say Come to my place for lunch, I’ll leave work early and I’ll take you, it’s not easy to find. She sounds dubious but she’ll try that.

She phones back, amazed. He saw sense. We’re coming for lunch, she says, relieved. She can’t see, he can’t hear, so she was dreading looking for a small parrot in a strange haystack.

When I get home they’re on my stoep and Jess has given them tea and Tommy is busy cooking lunch for everybody – pasta carbonara. My children! Bless them! I had told them I’d love it if you’d give them a polite hello, but you needn’t stay, just make your excuses and go. They decided to completely exceed all expectations and charm the old bullets. Proud of ’em!

Off we go to meet Sumie who has three baby African Grey parrots in a box. His grandfather breeds them in Utrecht. Dad had said he wanted to choose his own. We check them out on the tailgate of my bakkie in West Road Overport. Dad picks one and now I think, Here comes the bargaining. R2500 says Sumie. No way says the ole man and shuffles off to the front seat of my bakkie. He comes back slowly with the bird magazine in his hand, stabbing his finger at Sumie’s ad: R2300, moaning Now I have wasted my time coming all the way from Pietermaritzburg. Sumie says to me I thought I wrote R2500! To Dad: Fine, Uncle Pieter, R2300 says Sumie.

And the food for free, says the ole man. That cost me R100, Uncle Pieter, I’ve just fed them, so give me R80, says Sumie. It’s my birthday on Friday (true), counters the ole man, You should give it to me as a gift. How old you’ll be? asks Sumie. Ninety Five says the ole man (true) so they settle on R50.

Now they debate who’s box is better. Sumie has a shoebox – it’s wider. Ole man has a box some electronics came in – it’s deeper. Ole man realises if he takes Sumie’s box he gets both, so he settles on Sumie’s shoebox.

We go back home to eat Tom’s delicious pasta lunch, followed by ice cream and coffee, and off they go back to Maritzburg. The ole man changes into second too soon up the steep hill. He would have hated it that I heard that.

And I didn’t take a single photo! Damn! Well, here they are with great-grandkids:

And I just thought: When last did I post a recent pic of my favourite children? Here they are willingly posing for me: 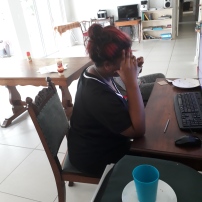 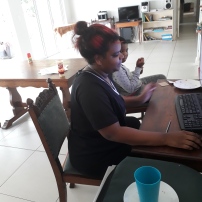 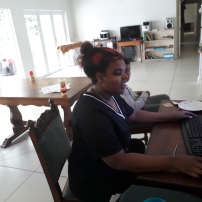 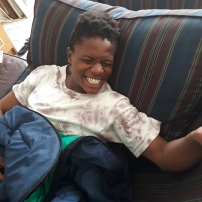