Played football in Apache Oklahoma in ’73 for the Apache Warriors. The coaches did their best to bring this African up to speed on the rules and objectives of gridiron. We played two pre-season warm-up games followed by five league games. And lost all seven encounters! Myself I was kinda lost on the field, what without me specs! So here’s me: Myopically peering between the bars of the unfamiliar helmet at the glare of the night-time spotlights! Hello-o! Occasionally forgetting that I could be tackled even if the ball was way on the other side of the field!
At that point I thought: Five more weeks in America, five more games in the season, football practice four days a week, game nights on Fridays. I wanted out! There was so much I still wanted to do in Oklahoma and in preparing for the trip home. I went up to Coach with trepidation and told him I wanted to quit football. Well, he wasn’t pleased, but he was gracious. We were a small team and needed every available man, how would they manage without me?
By winning every single one of the last remaining five games, that’s how!!
Coach Hulett won the Most Improved Coach Award and the team ended up with one of their best seasons for years!
I like to think the turnaround was in some small way helped by the way I cheered my former team-mates on from the sideline at the remaining Friday night games! 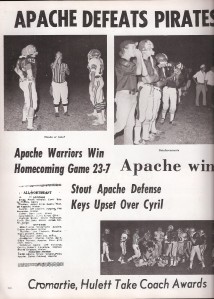