Aitch learnt the joy of indigenous plants on the Bluff in 1985 when at Wentworth hospital. Ian Whitton, friend and cardio-thoracic surgeon, indigenous gardener and nurseryman extraordinaire, pig-farmer, protea grower, pigeon-fancier, erythrina expert and all-round good friend took her under his wing. She also learnt from indigenous guru, horticultural landscaper, author, visionary and gardener Geoff Nichols; She collected seeds and swopped them for plants for and from Enver Buckus at Silverglen nursery; She worked for noted colonist, author, canoeist, British apologist, acrylic painter and historian Geoffrey Caruth Esq at his Geoff’s Jungle Indigenous Nursery; She joined BotSoc (now the Biodiversity Society) and got very involved, especially in the annual big plant sale, working with Sandra, Wally Menne, Jean Senogles, Dave Henry, Diane Higginson, etc; She spent fifteen years “botanising” (as they called it) with Barry Porter on his and Lyn’s Hella Hella game farm. We went there at every opportunity. It became our second home. They would roam the farm spotting and photographing plants and flowers, occasionally digging up one for culture with Porter’s Patented Plant Pincher**, a handy device Barry had welded together to make extracting small plants easy and non-destructive. Barry taught us to use Eugene Moll’s tree-ID book using leaves to ID the trees of Natal.

Our first property was 7 River Drive Westville, already mostly indigenous thanks to Mike and Yvonne Lello. On the banks of the Mkombaan River, it was paradise unfenced. We rooted out invasives and aliens and planted the right stuff as directed by Geoff Nichols. On his first visit he told me sternly, pointing ‘over there’, to “Get rid of that inkberry”. You know how Geoff is. Right. Sir! A month later on his next site inspection he said “You haven’t got rid of that inkberry!” Oops! True. So I undertook to do it that week.

A few days later I set to with my bow saw, sawing off all the branches and then cutting down the 100mm trunk just above the ground, Then I garlon’d that and composted the bits n pieces. Phew! Done! Finally!

A month later Geoff was back. “Who the hell cut down the tassleberry?!” he bellowed. “And you STILL haven’t got rid of the inkberry!” I never lived that one down. We planted five tassleberries to make up for it. They have male and female trees, so that was best anyway. I am pleased – relieved – to report they did well over the next fifteen years!

Aitch didn’t mind a bit of attention, so when our garden was chosen to be on display for Durban Open Gardens she blossom’d n preened and was in her element! She LOVED showing people around the garden and re-assuring them that it was quite safe* even if it did look a bit wild. In fact she would keep the entrance and pathway to the front door and pool very tame, civilised and trimmed so as not to scare people and put them off wild gardening. The hidden parts of the garden could go wild and host the 112 species of birds we recorded in the garden over the fifteen years we lived there. For 32 of those species we saw nests or fledglings.

We put in a bird bath outside our bedroom window and plumbed it with a fine hose and left it running with a fine little spray of water which ran constantly for fifteen years. I could control the fine trickle from a specially fitted high tap from inside the bedroom. The birds loved it. Me too. The tap is visible against the far wall on the left; the birdbath is hidden behind Jess. 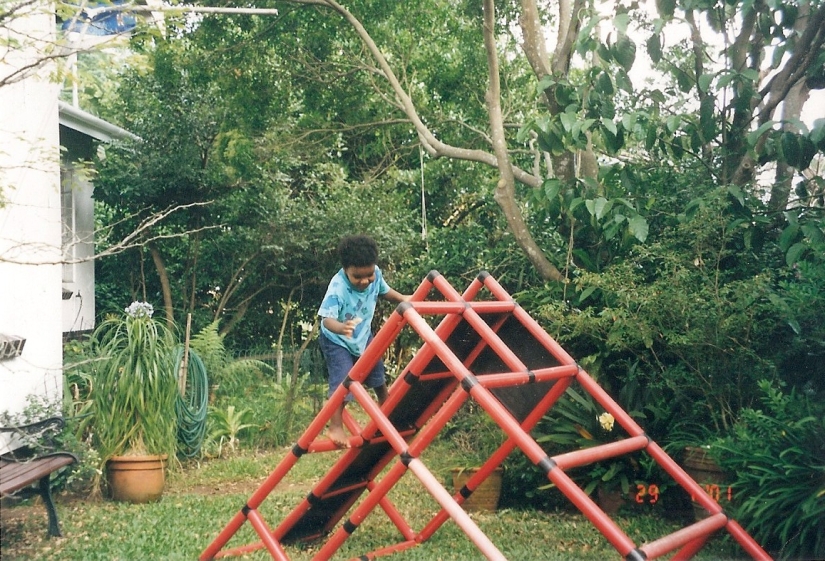 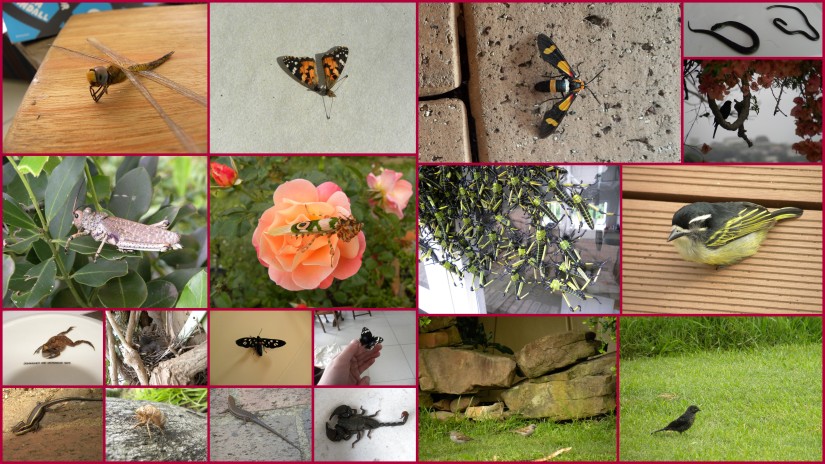 *In fifteen years we saw one Natal Black Snake, one Brown Water Snake, a few Herald Snakes, a resident House Snake, regular Spotted Bush Snakes, tiny Thread Snakes, a couple of Night Adders, and that was all. None of them really dangerous.

**Barry also made us a bird feeder, which he called Barry’s Bizarre Balancing Bird Bistro. More about Barry and Lyn here.

One year we decided to make a large pond by damming a little stream that flowed though our garden into the Mkombaan. It came to be called (by Aitch) “Koos’ Folly”. In my defence, Nichols was involved in the planning. We built a substantial dam wall next to the Voacanga on the bank, covered in bidim felt and strong and long-lasting, creating a deep pond about 8m X 4m in size. Which the first flood filled up to the brim with silt. One shot. Pond now a shallow little mudflat with most of the flow passing under it underground. I learnt: Don’t mess with watercourses.

Some murdering had to happen. There was a mango tree in the grasslands and a fiddlewood behind the house. I bow-saw’d and de-barked and felled. Then I garlon’d. That would sort them out. Well, only years later did I finally get rid of the last shoots that kept sprouting. I developed a genuine respect for their kanniedood properties! A massive syringa on the banks of the Mkombaan I just ring-barked and garlon’d. No cutting. Two years later it crashed down across the river, bank-to-bank, forming a bridge you could walk across. 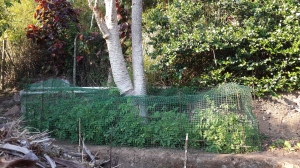 Tomatoes screened against vervet monkey raids. These powder-blues have been sending in the troops this winter as the drought bit hard. I put food out for them early mornings before they wake on the boundary so they discover it “by chance”.

The hydroponic spinach under shade cloth – makes the most wonderful mfino for my phutu.

The meadow is coming on very nicely since the head executive gardener Tobias Gumede went on leave. A wonderful chap, he struggles with the concept of wu wei – or “Masterful Inactivity” . He feels he ought to be DOING something and I often have to sit him down and ‘splain how I want, very often, to just ‘let it be’.
He does understand (its been over ten years now, after all) but he likes to make sure. He got back this week and we set out a new, even more laid-back protocol for 2015.
Tobias just shakes his head.

Here’s the admonition: If you’re tending your garden closely, and mowing your lawn edge-to-edge, if you only have one type of plant in your lawn (monoculture!) and if you (you don’t!!?) use any pesticide, you are not – by any stretch of the imagination – planet-friendly.
Go on: Find an area of your garden you seldom visit (or create such a space) and let it run wild. Save time, save money AND the lil creatures will love ya. Wu Wei!!

Rita wrote: Maybe Tobias is actually back but you can’t find him!

Pierre wrote: Nothing wrong.You have to rest and rotate your pastures.

Me: Exactly. And when you do mow, mow around those tall little grass islands where missed dog poo has caused fertile growth. Masterful inactivity rules!

My garden is a wonderful tangle of KwaZulu indigenous growth gone wild. Interfered with only by my best man Tobias Gumede’s earnestly-felt desire to do something. Recently he trimmed the undergrowth near the birdbath and the spot where beautiful turquoise Araneus apricus spins her web each night and takes it down every morning.

I had to sit him down and remind him: Tobias, remember when we listened to the yellow-bellied greenbul’s complaints and you told me how it was saying “Don’t shoot the birds, it’s Spring and they’re nesting”, and how you would teach the kids in Jozini not to shoot birds in that season – and how they did anyway!?
Well, its Summer, and remember: We don’t trim or cut anything till the season fades and we’re sure no birds or other creatures are nesting. And even then we do it with great circumspection? Oh Yes, He Does Remember and Sorry, He Forgot.

But he forgot again and as I was leaving he asked Can You Buy Me A Rake? Um, what for, Tobias? Oh, Yes, He Forgot, We Don’t Rake. Right.

Well, I mention this because I have recently found out that unbeknown to me, I garden according to the ancient principle of wu wei. I mean, I always suspected my method was brilliant, but wu wei! That is brill. Its the Zen (or Tao? – or something . . ) art of “masterful inactivity”.

I love it: “The Art Of Masterful Inactivity”! Wu wei! I can do this!

I’m reading a book by Esther Woolfson who lives in Aberdeen in Scotland called Field Notes from a Hidden City. The review of her book made me want to write about all the wonderful hidden creatures in my garden and generally in Westville, so I bought it with the express intention of plagiarising it. I’ve got to the part where she writes about wu wei and I’m right behind her.

I read a lot about books and then occasionally I buy one and actually read the whole thing. Often the book review is better than the book. I bought Everyone Loves a Good Train Wreck by Eric G Wilson. Well, it was a very good review.

Back to plagiarism: I will write to Esther and tell her what I’m doing if I get the book done. My wu wei credentials are not confined to gardening, however, so she may be safe.

Here’s the manicured bit for soccer, rugby and biking, with refuges for creatures in front and behind. When the kids stop swimming the pool will be made more frog-friendly. Made? Well, Allowed To Go frog-friendly . . . .

So how did I know the beautiful little turquoise orb spider I found in my garden was Araneus apricus? I went to my saucers. This one is seldom in her cups: My favourite entomologist Tanza said:

Hi Pete – I think she is Araneus apricus, a little orb spider. Most are nocturnal, spinning their webs in the early evening and then removing them in the morning. Maybe she got out of bed late . . . ; It is probably a “she” as the males are often (but not always) smaller.- Tanz

I first met Tanza when she was working with social spiders on the Hella Hella bridge over the Umkomaas river. Hundreds of them obligingly spun webs between the aluminium railings, allowing Tanza to mark and measure at leisure. Usually they’d be in tangled bushes!