Our two walks in the wilderness with the Taylors, Foggs, Janice Hallot and Gayle Adlam blur into one and I have got the photos all mixed up, so here are some more memories from 1999 or 2005.

On the drier of our two walks there was little surface water about, so around the campfire one night . .

. . when my companions were suitably lubricated, I put one of my (many) pet theories to them. Tomorrow, instead of walking about scaring the animals, let’s go to that waterhole we saw where a stream joins the Mfolosi river and get comfortable and simply lurk there till lunchtime! Let the animals come to us. Who’s in favour?

To my surprise and delight they were all so mellow and agreeable they voted in favour and we did just that. It was wonderful! We got comfortable a nice distance from the water and watched as all sorts of birds and animals came to drink. My idea of heaven: Lurking with telescope, binoculars and books!

These were slackpacking walks, so our kit was carried to the outlying camp by these handy bongolos. Here you can see Dizzi looking for her luggage, saying “Where’s my bongolo? Why don’t they have number plates?”

On the wetter walk it got hot one day and we asked our Rangers if we could swim. They said they knew just the spot. Miles later we got to the river at their swimming hole. But it was occupied:

Two buffs, an ele and a lioness had all had the same idea. We didn’t argue with them, we trudged on. Miles later we crossed the river again, and had a swim. Sort of. Luckily no pictures were taken. These were of a shoes-off river crossing, footwear and footprints:

The walks end with a last night back at base camp. We had left celebration supplies there in anticipation. 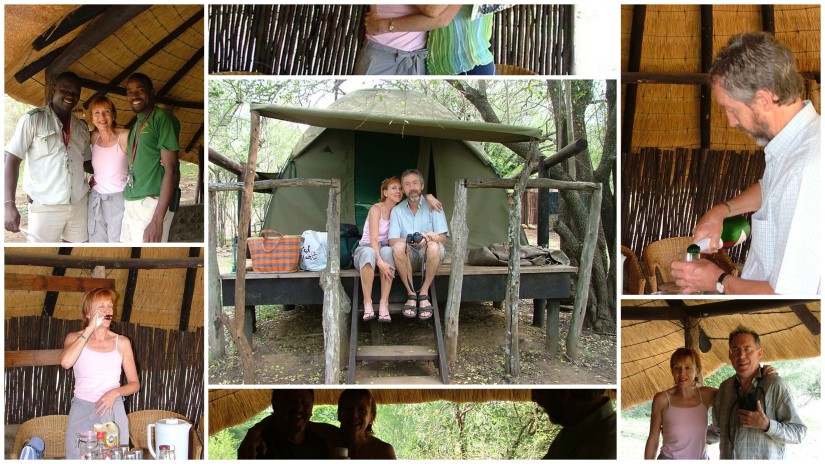 Then a champagne breakfast kombi drive before we left the park.

Denyse took most of the lovely animal photos 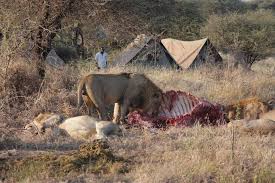 Memory is a Dodgy Business. I remembered the scene so clearly. Standing next to a fresh buffalo carcase red with blood; looking around, nervous that the lions who had obviously recently killed it might come back and be annoyed with us for putting our feet on its lunch.

We were on a walk in the beautiful wilderness area of Mfolosi game reserve; no roads and restricted access; accompanied by our two armed Rangers we weren’t in any specific danger, but the feeling of ‘we’d better be careful’ was there, and I kept scanning the area around us.

Or that’s how I remembered it over the years. An actual picture painted a different picture! Photographic evidence of how dodgy one’s memory can be and how the years can enhance it! The top picture was sort of my memory; Here’s the actual carcase: No lion would want to look at it! Nor a hyena, nor a vulture! Only detritivores would still be interested in those horns n bones!

Aitch took the picture with her point-and-shoot Nikon. Our group photographer is the colonial Tarzan-like oke on the left. He had the penis-substitute camera and bossed us around and lined us up and made us pose (poeseer, he said, sounding like one of SanMarie’s jokes), and fiddled with his f-stop. A purist, he was still deeply into film and darkroom development theory. So where’s his picture?

He’d forgotten to put film in the camera! We have not let Taylor forget it.

Here’s the moth that will get to those horns in time:

and whose larvae will make them look like this: