Our two walks in the wilderness with the Taylors, Foggs, Janice Hallot and Gayle Adlam blur into one and I have got the photos all mixed up, so here are some more memories from 1999 or 2005.

On the drier of our two walks there was very little surface water about, so around the campfire one night . .

. . when my companions were suitably lubricated, I put one of my (many) pet theories to them. Tomorrow, instead of walking about scaring the animals, let’s go to that waterhole we saw where a dry streambed joins the Mfolosi river and get comfortable and simply lurk there till lunchtime! Let the animals come to us. Who’s in favour?

To my surprise and delight they were all so mellow and agreeable they voted in favour and we did just that. It was wonderful! We got comfortable a nice distance from the water and watched as all sorts of birds and animals came to drink. My idea of heaven: Lurking with telescope, binoculars and books! 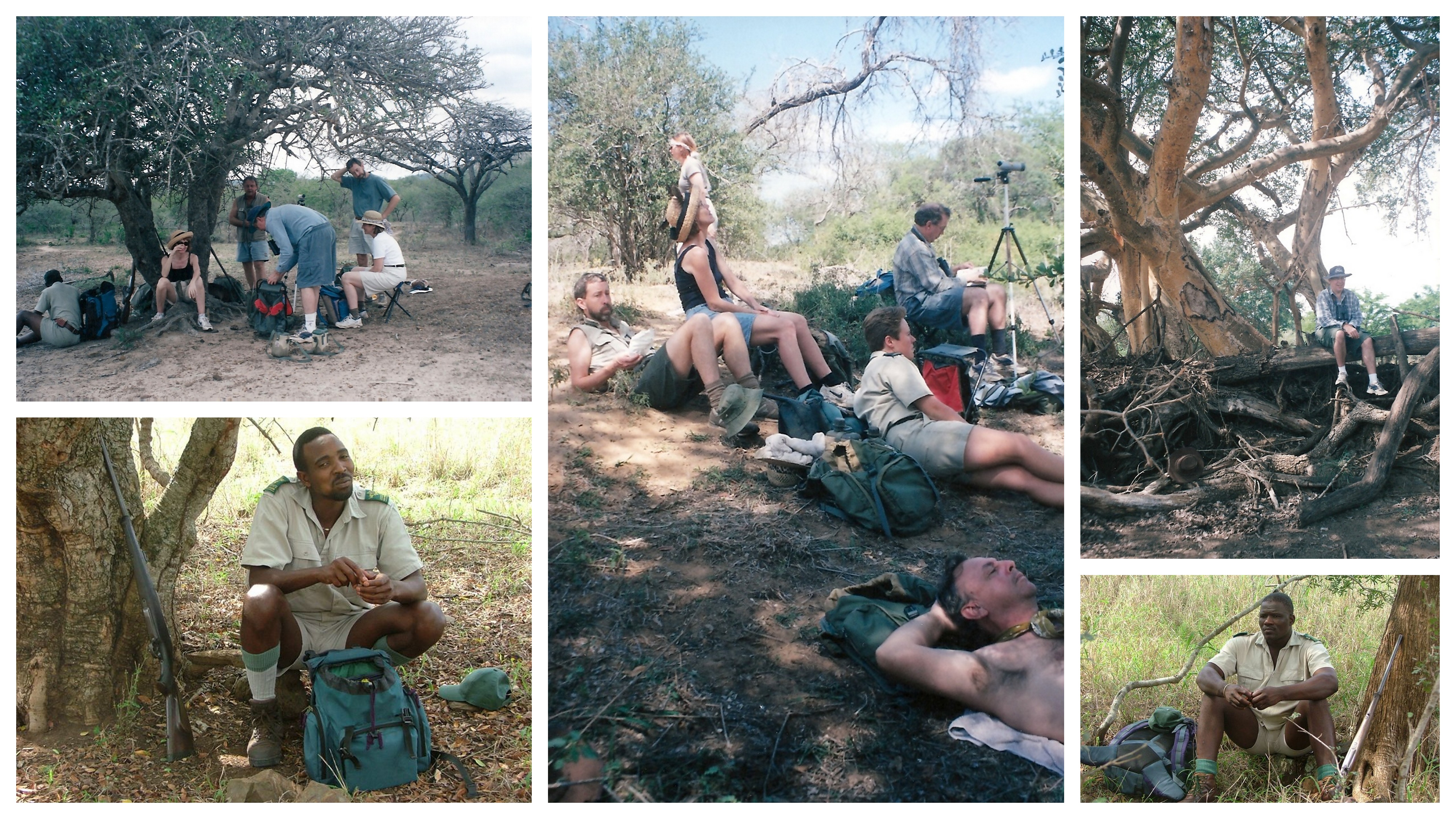 These were slackpacking walks, so our kit was carried to the outlying camp by these handy bongolos. Here you can see Dizzi looking for her luggage, saying “Where’s my bongolo? Why don’t they have number plates?”

On the wetter walk it got hot one day and we asked our Rangers if we could swim. They said they knew just the spot. Miles later we got to the river at their swimming hole. But it was occupied:

Aw! Two buffs, an ele and a lioness had all had the same idea. We didn’t argue with them, we trudged on. Miles later we crossed the river again, and had a swim. Sort of. Luckily no pictures were taken. These were of a shoes-off river crossing, footwear and footprints:

These wilderness walks end with a last night back at base camp. We had left celebration supplies there in anticipation.

Then a champagne breakfast kombi drive before we left the park.

Denyse took the kudu, zebra and vultures-on-kill photos in the feature collage

Memory is a Dodgy Business. I remembered the scene so clearly. Standing next to a fresh buffalo carcase red with blood; looking around, nervous that the lions who had obviously recently killed it might come back and be annoyed with us for putting our feet on its lunch.

We were on a walk in the beautiful wilderness area of Mfolosi game reserve; no roads and restricted access; accompanied by our two armed Rangers we weren’t in any specific danger, but the feeling of ‘we’d better be careful’ was there, and I kept scanning the area around us.

Or that’s how I remembered it over the years. An actual picture painted a different picture! Photographic evidence of how dodgy one’s memory can be and how the years can enhance it! The top picture was sort of my memory; Here’s the actual ‘carcase’ – it’s a skeleton! No lion would want to look at it! Nor a hyena, nor a vulture! Only detritivores would still be interested in those horns n bones!

Aitch took the picture with her point-and-shoot Nikon. Our group photographer is the colonial Tarzan-like oke on the left. He had the penis-substitute camera and bossed us around and lined us up and made us pose (poeseer, he said, sounding like one of SanMarie’s jokes – she’s on the right with a rifle), and fiddled with his f-stop. A purist, he was still deeply into film and darkroom development theory. So where’s his picture?

He’d forgotten to put film in the camera! We have not let Taylor forget it.

Here’s the moth that will get to those horns in time:

and whose larvae will make them look like this:

. . and here’s an old-timer-y look to make the carcase look fresher:

. .and another desperate attempt at the realism I so clearly remember:

Lunchtime high on the Momfo cliffs overlooking a great bend in the Mfolosi river. Our guides lit a fire and began to prepare our lunch. We shucked off our light daypacks and settled down for another ‘well-deserved’ break after our gentle amble up the hill.

From our high vantage point we had already seen a buffalo in the sandy river bed, a rhino on the far bank and a lioness hiding behind the reeds on the opposite bank. As we watched she stalked across the wide river bed towards some zebra. She lay down and waited once she was on the near bank. A few more lionesses and a lion walked across the sand to our left, crouching and flanking the zebra, who panicked and dashed off straight towards the first lioness. She pounced in a cloud of dust and she and her target disappeared behind the thorn bush. We strained to see what happened. Did they get their lunch?

After a while they all walked out looking a bit disgusted with themselves. So no, probably not.

Scoping well left of the river up an adjacent valley I noticed baboons in two sycamore figs, the mfolosi tree that give the river and the park its name. Suddenly they started barking and swearing in fluent baboon-vloek, and a magnificent leopard appeared in view, staring up into the tree above him. I got the scope on him and called the others. He was most obliging and waited till all nine of us, including the two rangers had a good look before flicking his long tail and bounding up the tree, to increased pandemonium from the residents. We heard loud shrieks, even ruder words and then much barking and squealing. I watched for a long while to see if I could spot the leopard again. But we didn’t find out if he got his lunch either.

So as far as lunches go, we can only confirm that we definitely ate ours, and that it was the delicious traditional huge white bread sarmies with butter, tomato and raw onion with salt and black pepper, washed down with freshly-brewed Five Roses tea. Mmm mmmm!

Four of the Big Five for lunch. On foot! Actually, sitting on our bums at lunchtime. What a day! And the rhino was the real Big Five member, not the more placid white rhino. The big five idea originated in the days when they were considered the five most dangerous animals to hunt. The days when the way you “got” the big five was to kill them, not just to see them. We joked as we packed up to walk back to base camp that we now needed to see an ele on the way home to round off our lunch. Well, we did. It was almost ridiculous. But thrilling.

The next day our walk took us on a different route. As we crossed the low Mfolosi in the blazing sun we asked our guides if we could swim. ‘Well, you can wallow,’ they said, ‘It’s not deep enough to swim.’ So wallow we did, King Fogg and I; and that’s how we came to spot the Big Six, adding the rare Pink-faced Ceramic-white Freshwater Mfolosi Beluga Whale to our tally of wondrous things spotted in that very special place, the wonderful Mfolosi Wilderness Area.

The next day we walked upon this sleeping pride, loafing on the riverbed. They scattered when they saw us, the male on the right leading the flee-ing, tail tucked ‘tween his legs! They’ve learnt not to trust those dangerous upright primates.