As students 1974-1977 we would frequent the Casa Blanca roadhouse at the foot of Nugget Hill below Hillbrow when the pocket money arrived from home. Squeezed into Joz’s VW Beetle or Steve’s beige Apache or Bobby’s Mini Cooper S or Glen’s green Toyota, we’d ask the old Elvis-looking guy with a cap, flip-up sunglasses and whispy whiskers for a burger n chips plus a coke; Or a cheeseburger chips n coke 70c, or – as Steve Reed reminded me – “if we were flush, the Dagwood with everything including the runny fried egg. Sheer luxury. Messy, but worth it!”

I don’t have a pic of the Casa Blanca, but here’s the Doll House in Highlands North and the Casbah in Alberton so long: 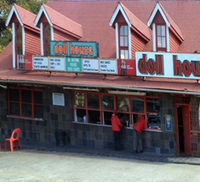 Every so often you’d be asked “Move forward” and you’d inch forward to make room for new arrivals behind you, till you reached the “finishing line” where you handed back the tray the Elvis look-alike waitron had clipped to your half-rolled-up window and drove off under the big sign on the wall: QUIET. HOSPITAL.

Many years later (OK, twenty six years later!) work took me back to Jozi and I had time to kill in my hired car so I drove around Doories and Yeoville and Hillbrow. Lunchtime I pulled in to the Casa Blanca and I SWEAR there was the exact same oke who had served us twenty six years earlier, with his SAME cap, his SAME flip-up shades and his SAME whispy whiskers! Astonishing!

I told him cheeseburger chips n coke and how long have you been here?

Charged me 70c. Plus twenty six years-worth of inflation.