One year Aitch and I did the mini-Shova cycle ride. Held on the same day as the tougher, longer “Amashovashova” it’s the easy part: 38km from Hillcrest downhill all the way to the sea. On the way we chatted and decided “Next year we must do it with the kids – they’ll love it”. Sadly Aitch wasn’t up to it the next year, but she rose early to drive the rest of us to the start.

OK, I lied about the downhill-only. In the early days the start was at the bottom of a valley, so the first couple kays were quite a challenging uphill. This reminded me I’d forgotten to give Tom his muti. Loud complaints and long descriptions of just how dumb it was to be pushing your bike (which is the WRONG bike for this anyway) and why should we be in the rain? And who’s idea was this anyway? And there must be more intelligent things to do . . . and and. Which I ignored.

We hit the downhill phase and wheeee! the two kids whizz downhill, feet flying, bikes wobbling, looking around to see if anyone’s impressed. I just close my eyes and think: There are hardly any fatalities on these events, it’ll be fine.

But of course all “only downhill” sections have their little uphills and Tom is really REALLY slow up these. After a while Jess can wait no longer. She shovas off and I now have only one kid to chaperone. The slowest kid on the whole mini-shova.

I wait, I feed, I juice him up. I explain “focus” to him. He says “Dad, I’m having FUN” so what can I do but laugh. He sings me an anti-girl song. Something about: Just Barbies who think they’re fantastic, But their boobs are made of plastic

He fills his pocket with BarOnes at the refreshment stand, then asks for an energy bar. This seems to have an immediate effect. On his tongue. None of it reaches his legs.
I ride ahead for 100m, stop and look back. He’s 99m behind. I park my bike at the top of a hill and walk back to fetch him. When I reach him he’s LITERALLY inching along. TINY little shuffles. But he’s laughing and singing, so so am I.

And talk! He talks only about winning, and fast, and what prizes are there for coming first, and if he had a better bike, etc. Doesn’t acknowledge me when I say, but Tom, your classmate Dan came past and he’s now WAY ahead (he had burnt up the tar for a few metres to catch him to chat, but Dan soon rode off into the sunrise).

Sunrise was magnificent and the rain cleared up and we had a glorious day. A mere 2hrs 35mins later we roared into the Moses MaFIFA stadium (I towed the little bugger for a kay or so towards the end).
Free juice and a medal – COOL!! 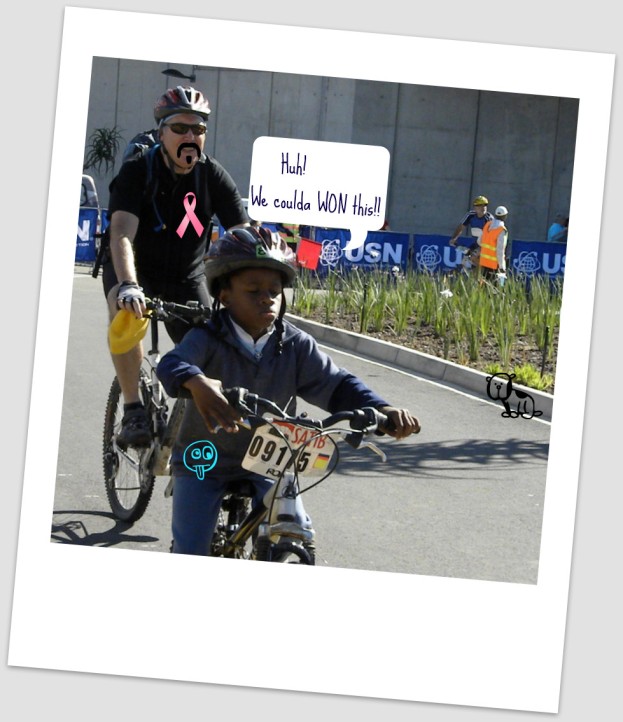