I skipped rugby in matric. Then I played one season of high school football in Oklahoma. When I got to Johannesburg I was ready to play rugby again, but as there was little sport at the Wits Tech, friend Glen joined Wanderers club. He had a car, so I joined him and off we would go in his Gran’s green 1969-ish Toyota Corona 1600 NX 106 to the field in Corlett Drive for practice.

I doubt there were 30 players in u/21 so we made the B side – probably by default; Games I remember were Oostelikes; Strathvaal; Diggers; None of these guys were delicate flowers.

At Strathvaal near Potchefstroom we played and lost and I was removing my boots at the side of the field when a senior coach asked me to please fill in for the senior 3rds – they were short. The game had already started so I laced up and waited on the sideline for a gap. I ran on as a scrum formed and they got the ball. Moving up from inside centre I went to tackle my man – and was carried off on a stretcher.

Who knows what happened, but at about five or six seconds it was the shortest game of any kind I’ve ever played! Those miners were built like brick shithouses and liked them nothing more than some explosive contact! Here’s one of the more nimble Strathvaalians skopping daai bal: 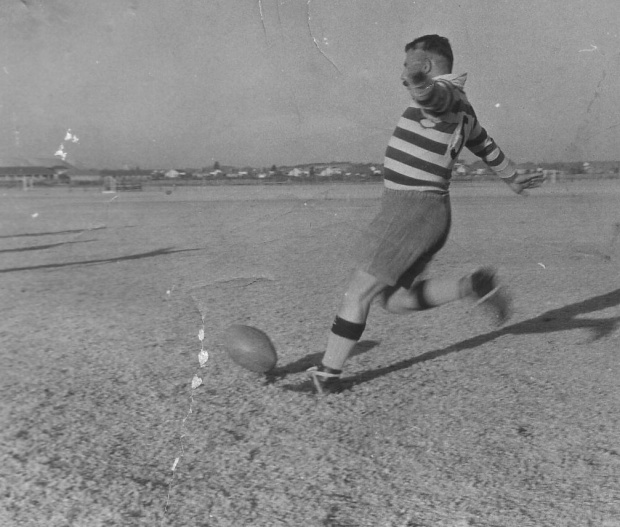