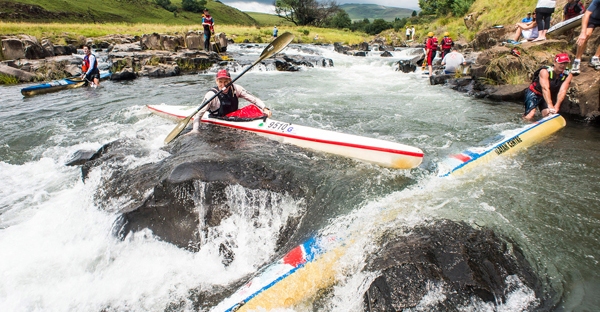 Rippleby the Kirb was desperate. He had a boat with two holes in it and only one body to fill one of the holes. He needed another body and he was at the stage when any body would do.

It was the South African K2 Champs and this time Rip was not going for a top spot, he just wanted to be there on the lovely Umzimkulu River with its fascinating and unusual features: Clean water and running water. We’d had a few seasons with neither in our other rivers.

He obviously didn’t ask me, as I was a bit handicapped. Firstly, I had a firm ‘one man, one boat’ policy; secondly, I had never paddled a double, so although that made me an unknown factor, it was not widely thought that I’d be an asset in the engine room. Thirdly, when once I tried to join his group he called has-beens he put me firmly in my place with ‘Swanie, you can’t be a has-been if you never was.’

Eventually he did ask me – I told you he was desperate – and I accepted on condition I did not have to take a paddle along. I would sit in the back and provide company and good cheer. And some heckling. No, he insisted, I had to take a paddle – even though he knew it would be mainly for ornamentation.

We compromised: I took a paddle and a carry-pack of beer.

We decided to come last, so when the gun went off, nothing happened. This was my usual start but for Rip a novelty. Only when shouted at from the bank to ‘Get A Move On!’ did we mosey off downstream.

It soon became apparent that our plan was in danger. We passed a lot of people. People swimming, people looking for their paddles, people trying to lift up their boats filled with water and wrapped around rocks.

But we were prepared. We stopped below the first big rapid and had a beer each and helped people in need. Then we moseyed off again once everyone had left the scene. But once again we started passing hordes of boats. Flotillas! It was a problem. We stopped twice more for the same reason and refreshment.

Eventually there was nothing we could do, the finish line arrived and we crossed it burping pleasant beer breath. We kept an eye on the line over a couple more beers at the finish and about ten boats finished after us.

Mission unaccomplished. But a lot of fun was had.